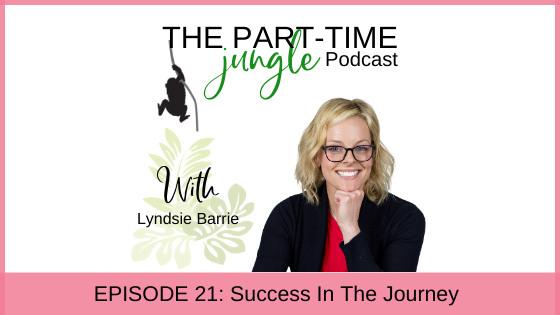 Lyndsie Barrie is a mom and the founder of YYC Fempreneurs where she shares her passion and expertise of social media with female entrepreneurs, tirelessly promotes community and collaboration, and is an instrumental part of turning mere ideas into viable and sustainable businesses. Lyndsie is also the owner of Barrie Financial Consulting Inc., where she shares financial concepts and strategies to enhance the way women earn, save and invest their money, as well as the author of two books “Money & The 39 Forever Mom” and “Find Your Voice on Social Media”.

On this episode of The Part-Time Jungle Podcast, I had a fantastic conversation with Lyndsie about finding success in the journey. Lyndsie talked about the importance of recognizing and celebrating the wins and milestones along the way, creating a community of like-minded individuals, and implementing strategies such as batching and setting boundaries to allow us to be more intentional and productive with our time.

If you prefer to listen, check out Episode 21 of The Part-Time Jungle Podcast. 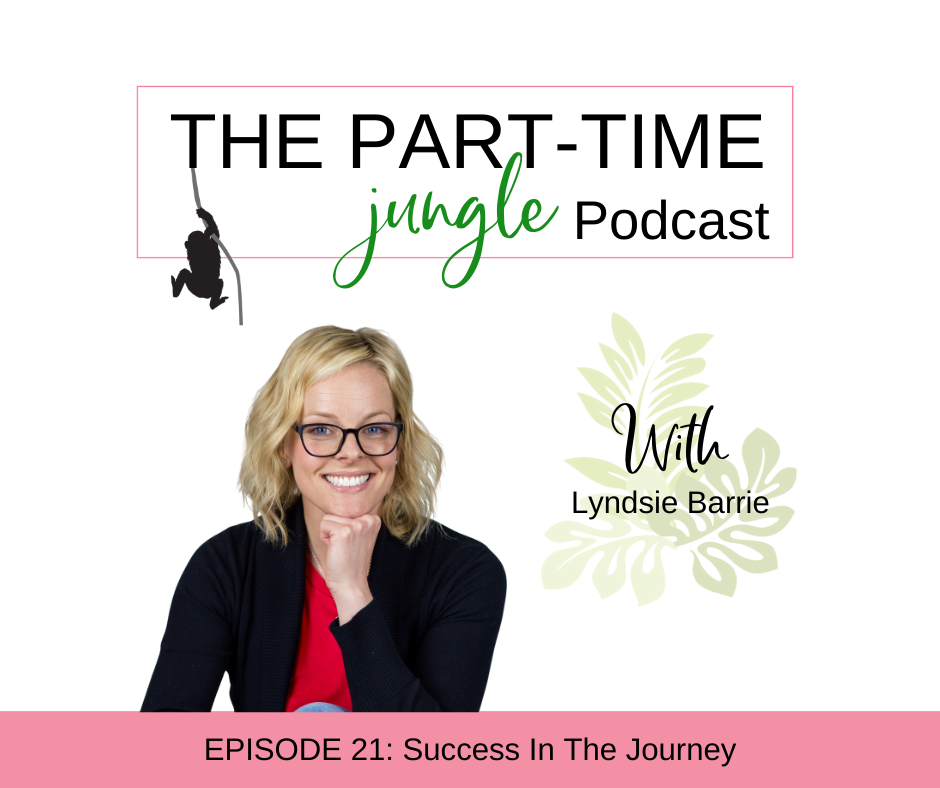 Lyndsie and I discovered that we share a few things in common including a love of popcorn and being moms to 14 year old boys who play hockey! She was so easy to chat with and we had a few laughs along the way. 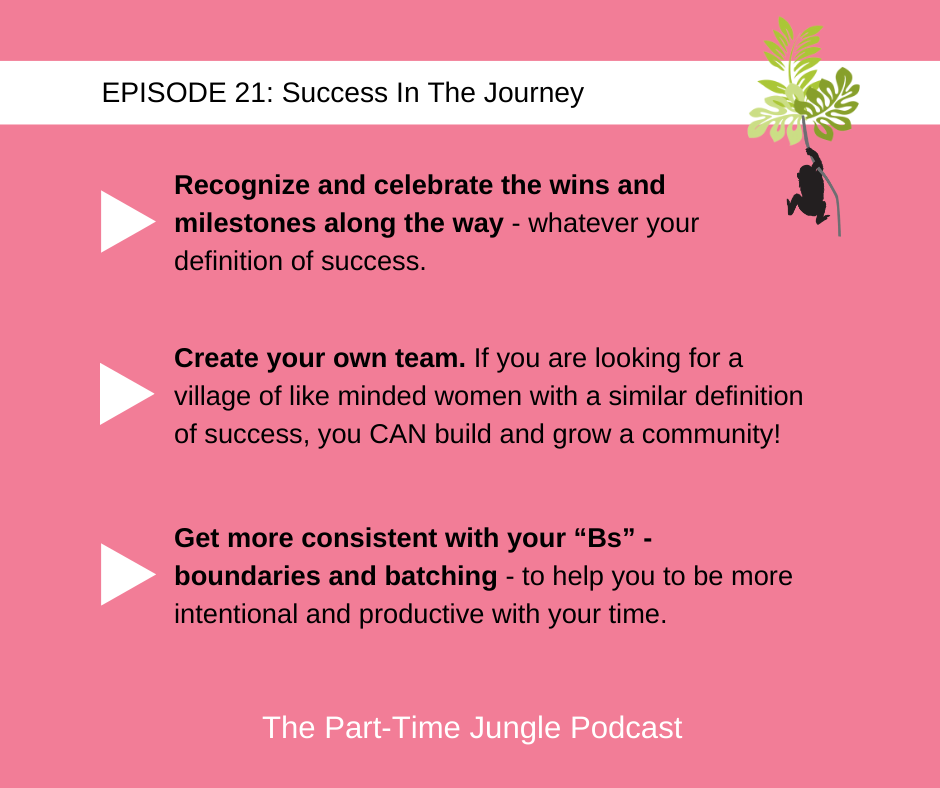 JUGGLING MANY HATS AS A MOM

A strategy that has helped Lyndsie with her motherhood work juggle was a mindset shift around incorporating her son into her business versus separating him from it. She believes that this allows your kids to see what mommy’s work actually looks like. Lyndsie is a youth leader at her church and volunteers at a summer camp and has found that when she asks kids what their moms do, they don’t even know! They hear that mommy’s working or that she has work stuff to do. Lyndsie started telling her son specifically what she was doing and even attaching the actual dollar values that her work was bringing in. For example, this client pays me this much. Lyndsie gets really nitty gritty about it.

INTEREST IN BEING HER OWN BOSS

Lyndsie knew that she wanted to be her own boss from about the age of 18. When she graduated from high school, she moved out to Vancouver where she had older step siblings there. They worked with a company called Amway, the world’s largest direct selling company that manufactures and distributes nutrition, beauty, personal care and home products. So Lyndise was introduced to the idea of being her own boss and earning residual income – which means doing something once and continuing to make money off of it.

From that experience, Lyndsie gleaned a lot of self improvement and personal growth and decided that she wanted to create her own business from her own brain, with her own products. What she eventually learned is that if you can learn something and teach others how to do it, that is a marketable product that you can earn residual income from.

After her time in Vancouver, Lyndsie became a hairdresser. In Vancouver, she had spent some time working as a receptionist in a salon and loved the atmosphere there. Lyndsie still does some work as a hairstylist today with a few clients whom she absolutely enjoys spending time with! Even back when she was in junior high and high school, Lyndsie loved doing her friends’ hair while they ate popcorn and watched movies.

Lyndsie spent 9 years in Grand Prairie but it didn’t feel like her forever home and Lyndsie had always loved the Calgary area. She had an opportunity to move to Calgary and tried to get her own beauty business going there. Lyndsie ended up working at a medi spa in downtown Calgary for a very short period of time. The long story short version is that the relationships that she made while working there led her to a position working for a large international investment firm and managing people’s life savings!

The number one thing the company was looking for was a long track record as a self employed person. She had that through her mobile beauty business that she had run in Grand Prairie. Lyndsie received training in all things financial and passed her Canadian securities course exams. She had some things already in place before she was hired, including and the company trained her the rest of the way. When she was fired three years later, it was because she wasn’t bringing in the commissions that she needed to be profitable for them as a company.

GETTING FIRED WAS A POSITIVE

Lyndsie says that she realized that getting fired was the best thing that ever happened to her. It was devastating in the moment but she booked a couple of meetings with people in the industry who had been telling her for a number of months that working with this financial company wasn’t going to be her forever job. They reminded her that she was an entrepreneur, and that working for this company was a job. It was not for her.

What Lyndsie realized that she was passionate about was learning and then taking that proven knowledge to help improve others’ lives. For example, she knew that she could teach complex financial topics in a way that would be easy for people to understand. This led her to hire a business coach who had written books and Lyndsie wrote her first book “Money & The 39 Forever Mom”. This is a book of “Simple, proven money success strategies for moms who want to stop worrying and start living!” 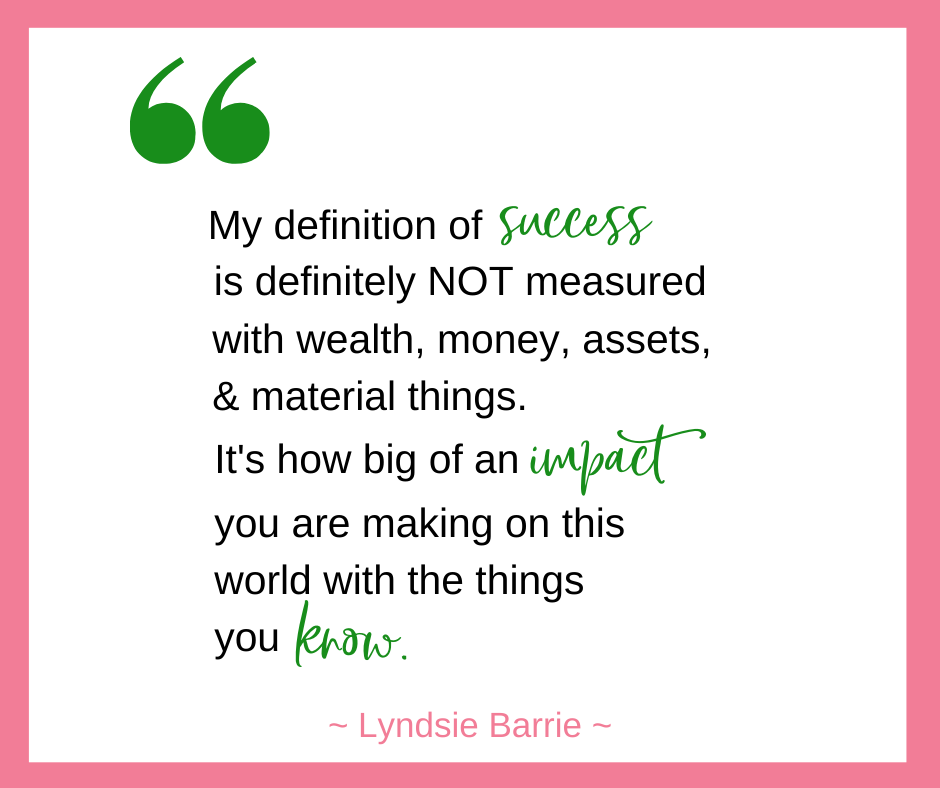 Lyndsie’s definition of success is being someone who has gained a lot of knowledge, a lot of it through trial and error, by falling on your face, by getting up, by figuring out what just happened there, and turning it into something teachable. Her definition of success is definitely not measured with wealth, money, assets and material things. It’s how big of an impact you are making on this world with the things you know. How many different ways you are packaging your smart brain and putting it out there. Lyndsie feels that we all have a moral obligation to share what we know. For Lyndsie, success is a reflection of how well we’re doing that.

THE EVOLUTION OF SUCCESS

Success is always evolving. Lyndsie talks about how it can feel like we are chasing a moving target. However, if you have clarity in defining and knowing what you want in your next chapter, you can celebrate the milestones and the wins along the way. Recently, Lyndsie had a milestone of having had one hundred students come through her marketing school a month ago! A celebration is in the works for this accomplishment with her YYC Fempreneurs! It’s important to set those goals, but then to actually celebrate the wins and accomplishments along the way. As well, it is important to have a clear definition of success so that you can surround yourself with people with a similar definition of success. Community and connection are a big part of everything that Lyndsie does. 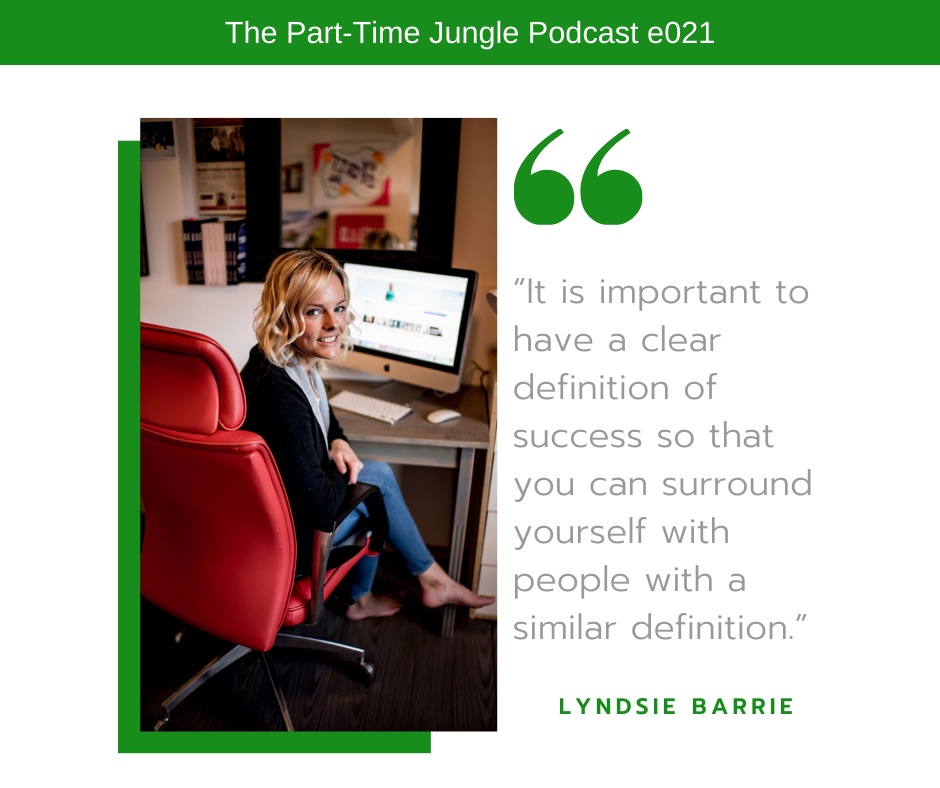 Pre-COVID, Lyndsie had been planning a Fempreneurs Fab Five event. It was designed to be like a speed dating event held at a local Calgary pub called “Trolley Five” and would be named “Fab Five at Trolley Five! Each attendee would have five speed dates with one other person for approximately 7 minutes each. Each person would have three and a half minutes to talk about their passion, purpose, business, and what they were excited about.

With COVID, Lyndsie switched things to a Zoom event where she utilized the “breakout rooms” to create the speed ‘dating’ approach. She had learned about the breakout room feature on Zoom through her work with her youth group. She has held four or five of these events and they have been incredibly successful!

Lyndsie feels that we really can’t accomplish much without like minded women around us with a similar definition of success. This was the biggest reason why she started the YYC Fempreneurs. With her marketing school, everyone shows up on the same day for six weeks and crushes it together! Lyndsie partners her students up and makes sure that at the end of the six weeks, they are a rock solid team. 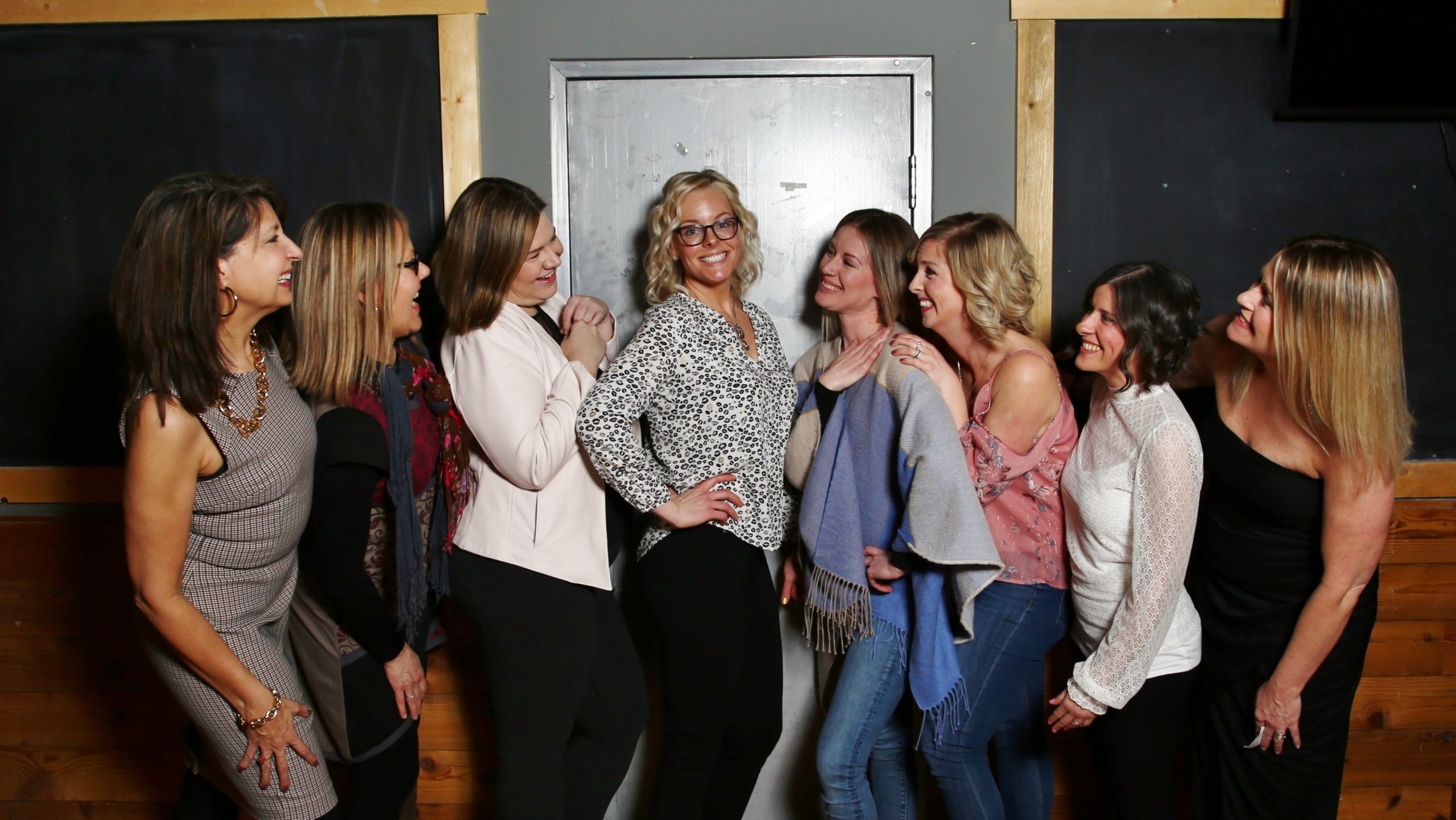 START YOUR OWN TEAM

This sense of community with like minded women was something that had been missing for Lyndsie. When she started the marketing school, Lyndsie knew that she needed more accountability and more teammates. So… she started her own team! So far, Lyndsie has gained 100s of contacts. She has connected with so many female entrepreneurs that she knows by name, knows what they do, knows how many kids they have and their kids’ ages are, what their biggest wins are. Lyndsie sees this as an incredible blessing.

WHY THE PART-TIME JUNGLE?

Yes – Lyndsie turned the tables on me! The name “The Part-Time Jungle” came from the combination of a few things. I am a mom of three kiddos that my husband and I often refer to as our “monkeys” and some of the time it definitely feels like we are living in a jungle! Initially, the “part-time” part of the name came from the fact that part-time work has been the best fit for my work juggle with my family life and I had struggled in navigating this grey area. It felt lonely and uncomfortable being in the “in-between” area of full-time work and staying at home full time. The name has really evolved though. In motherhood and work, it is really a jungle (part of the time) for ALL of us, no matter how we swing it. There isn’t one right or best way despite the opinions and judgements that some people have. Everybody is going to have a way that works best for them and their families and this may be due to choice, circumstance, or a combination of both. We can all learn from and support one another through engaging in conversation, sharing stories, successes, challenges, strategies, and ideas, and by building community.

Lyndsie shared a story that happened the morning of the same day we recorded this podcast. Her 14 year old son got his learners license on his birthday so he has been driving quite a bit since then. Lyndsie and her son did a big road trip down to Vancouver Island and back this past summer. She let him drive in Vancouver. He even drove on and off the ferry. The morning of this recording, she let her son drive to school.

THE NOT SO GOOD PART ABOUT POPCORN

Lyndsie had a piece of popcorn stuck in a strange spot up behind her teeth after eating it a few days before. Her gum felt inflamed and sore. So, while her son is driving she is trying to dig out the piece of popcorn with a piece of plastic. Traffic starts to pick up and they end up in a horrible traffic mess so they take a detour. Lyndsie finally has success in getting the piece of popcorn out! She has it on the end of her finger and shows it to her son. He looks over and almost rear ends the vehicle in front of them! Lyndsie yelled “Stop” really loudly in what she calls a scary mommy way! Lyndsie’s advice is to not talk to and distract your kiddo when his foot is on the gas pedal.

THE “Bs” – GETTING INTENTIONAL WITH TIME

Prior to starting the Fempreneur community and her marketing school, Lyndsie went through the Hoffman process which provides you with tools and techniques to change old and limiting behavioural patterns.

Thanks so much to Lyndsie for this incredible conversation and thank YOU for tuning in!