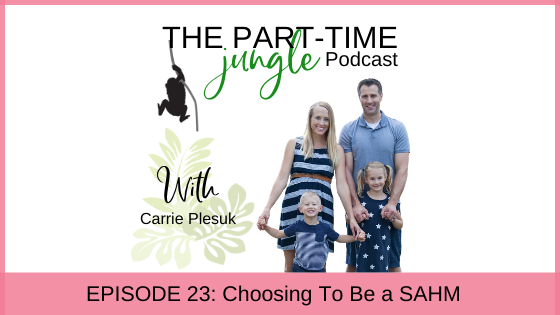 Carrie worked as a pediatric occupational therapist for seven years before welcoming her kids, now ages seven and five. Having always been a homebody and having dreamt of being a stay-at-home mom, she decided not to return to her job, instead staying home with her kids full-time. As her kids now reach school-age, Carrie is very gradually re-entering the workforce with a job that combines two of her passions…child development and the great outdoors. Working one half day per month as a TimberNook instructor and being able to bring her kids to work with her has been the perfect transition for Carrie. She is feeling ready for this next phase of life and is about to start the training program to become a TimberNook associate provider.

On this episode of The Part-Time Jungle Podcast, I had a great conversation with Carrie about the intentional planning and decision making that went into her choice of being a stay-at-home mom. Carrie shared how having a village, a schedule, and “me time” have been helpful tools in managing her SAHM juggle. She also talked about how remembering why she chose to be a stay-at-home mom helped her to lean into her choice and navigate her own self doubt as well as other people’s opinions

If you prefer to listen, check out Episode 23 of The Part-Time Jungle Podcast. 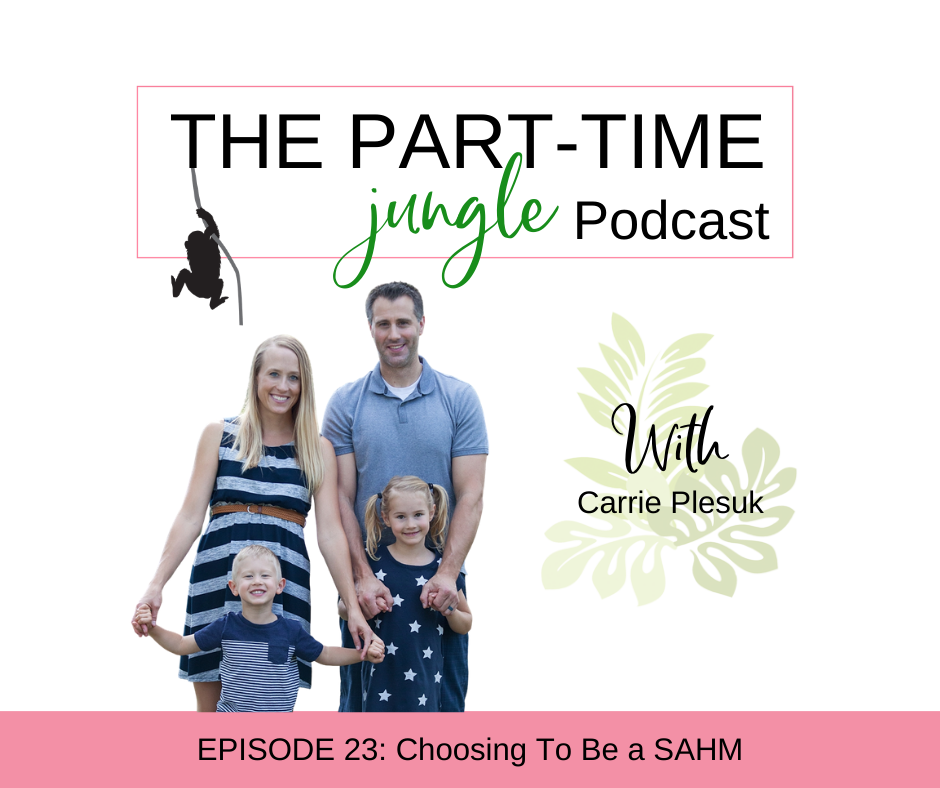 Carrie is so warm and easy to talk to and I am so appreciative of her openness and honesty in sharing her journey in navigating being a SAHM. I really enjoyed our conversation and I know that you will too! 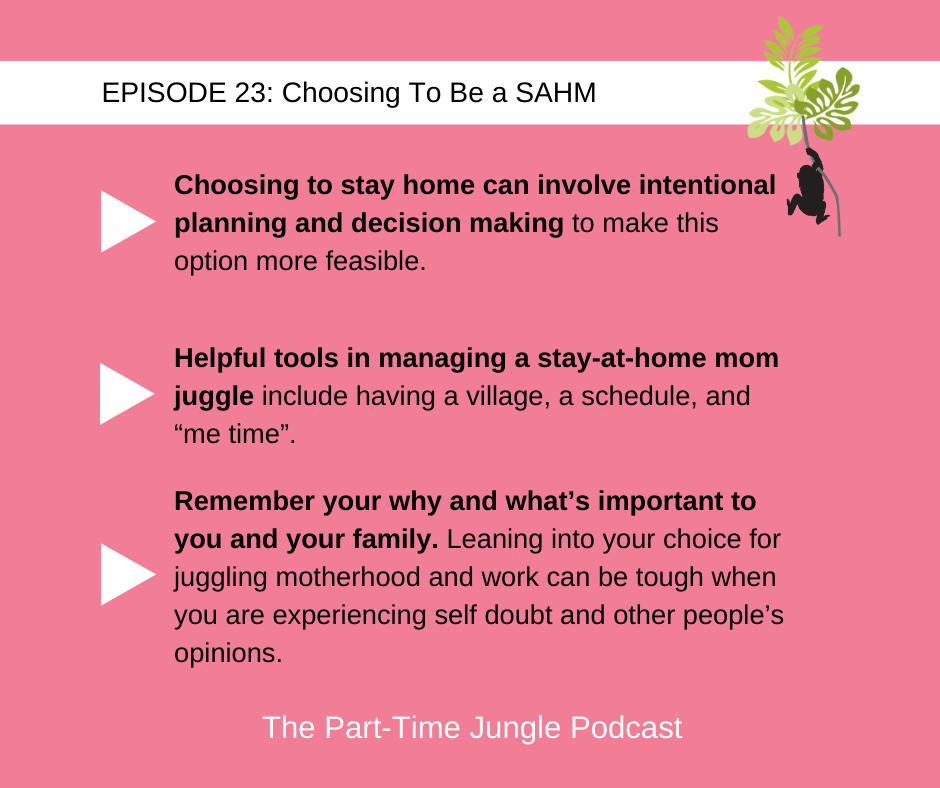 ALWAYS DREAMING OF BEING A SAHM

Carrie has always been a homebody. She loves being at home. As well, Carrie shared that she always dreamt of being a stay at home mom since she was a little girl. She said that in this day and age, this may seem strange or different, but this was what she hoped to do for her future family. Carrie’s mom stayed at home with her and her sisters when they were little and she loved it and felt lucky to have her mom at home.

As Carrie got older, she thought about the reality of actually deciding to stay home and putting that into action as an adult. She thought about things like whether her future partner would agree and see value in it and also whether or not it would be financially feasible. Her desire to one day be a stay-at-home-mom even played into her decision to pursue a Bachelor’s degree in Occupational Therapy. She was interested in the field and thought she would love it. However, Carrie also found it attractive that she could get a four year degree and come out and have a career right away, as opposed to continuing to go to university for a program that would take longer.

Not long into dating her now husband, Carrie told him that she wanted to have two to three kids and that she really felt a strong, deep need to stay home and not go back to work when she had them, especially when they were young. He supported that decision and understood her need to do that. They are now married and have two children so he obviously didn’t run the other way. Carrie shared that they also really planned for her to stay home. When she and her husband purchased their first house, before having kids, they bought under their maximum allowable purchase price based on their approved mortgage amount. Then, they waited a few years to see financially how it would work to hopefully be able to live off one income. A lot of decisions were made before she and her husband had kids in order to have Carrie staying home be feasible.

Carrie and her family live in the same city as both her and her husband’s families including their parents, her two sisters and their families, and her two sister-in-laws and their families. She also has a very close knit group of girlfriends. Carrie is able to lean on her village for help with appointments and looking after her kids. Although some people might say that adult contact is missing by staying home and that this choice may be isolating for some people, Carrie has reached out to her village for adult contact in arranging playdates for the kids for example. This has provided a social date for Carrie at the same time.

Carrie has tried to make a schedule for her and her kids where one doesn’t necessarily exist. Prior to kids being school aged, it can be hard to navigate the wide open unscheduled time of being at home and not having to technically be anywhere. Having a schedule really helped Carrie with this. If you struggle with having no schedule, which is what it can be like being a SAHM, you can kind of get lost. Along with playdates, Carrie scheduled times to workout two or three times per week. She would either attend a program that allowed her to bring her kids with her or she would go for a run with them in the chariot.

When our kids are little, it can be so tough and all consuming. Carrie found that, especially when her daughter stopped napping, she felt like she had no time to herself. Another sanity saver for her was to schedule in some “me time” for herself at least one evening a week. This could be wandering in Walmart, taking a book and reading it somewhere quiet, meeting up with a girlfriend, or going for a walk with their dog. While she was gone, her husband would handle bedtime from start to finish and she would come home after the kids were asleep. Even just having those couple of hours a week to herself really made a huge difference and made her feel like she was a better mom. 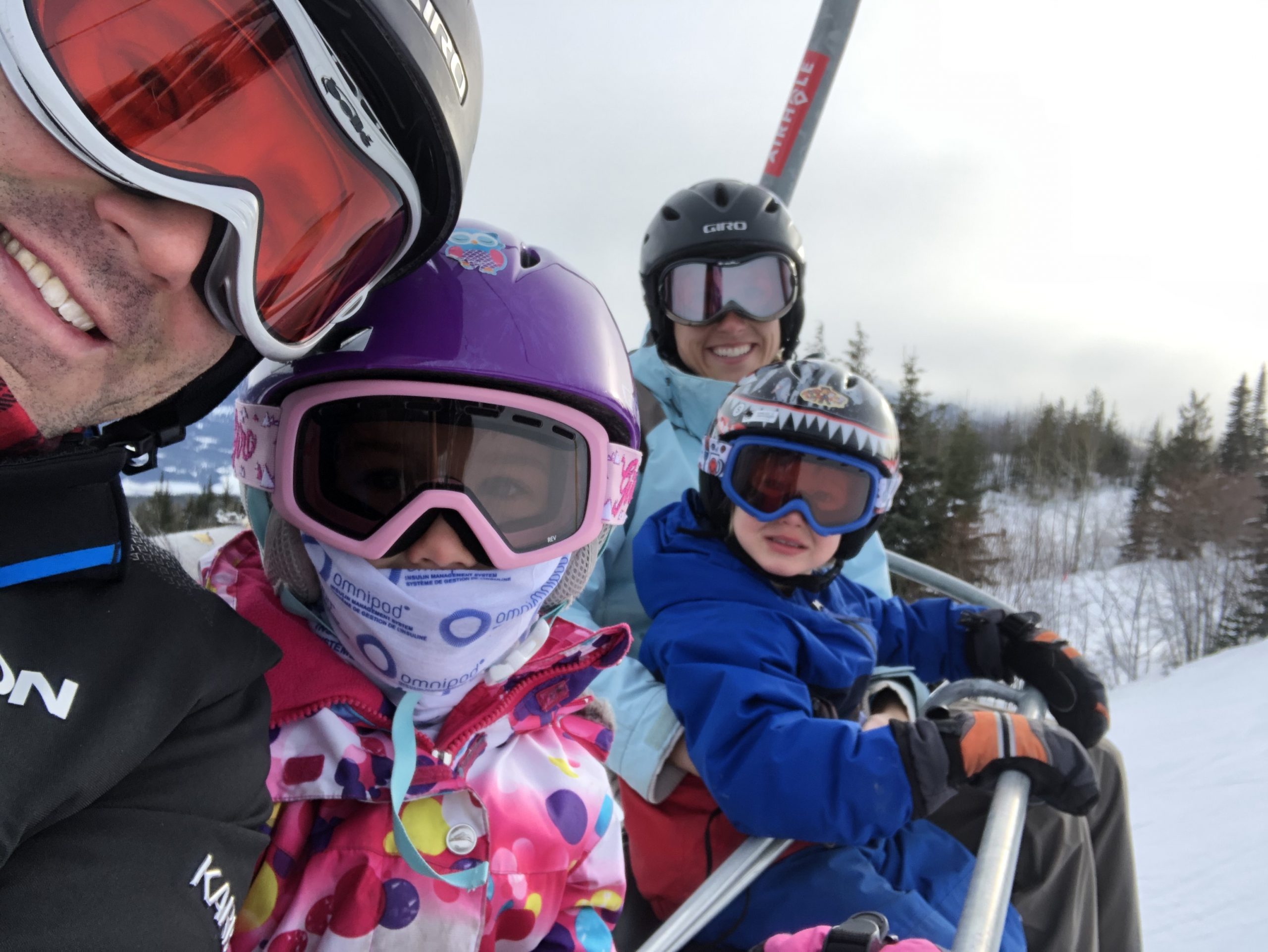 When Carrie decided to stay home, it felt like the whole world was saying that women needed to lean into the workforce and to try to do it all. Carrie felt like she was very much leaning way out. There have been a huge range of reactions from positive to negative and everything in between to Carrie’s decision. Often though, Carrie felt and perceived that other people were in total disbelief and doubt that she was actually going to stay home. Some of the disbelief and doubt was evident in what was said to Carrie. Some, she feels, was her perception of what people thought as well as her own self doubt.

Examples of other people’s opinions:

Ultimately, though, Carrie decided that staying at home was what she was choosing to do for the working portion of her life at least while their kids were young.

CONFIDENCE IN TALKING ABOUT HER DECISION

In the last couple of years Carrie can coherently and confidently talk about her decision. She feels that prior to this, she has been apologetic about it. She realizes that there are some people who would love to stay home and financially can’t. As a result, Carrie feels a bit of that natural guilt that she and her family were able to make it work. In terms of the decision to stay home, she now feels more confident in owning that for her and for her family. It’s what works for them. This is what makes Carrie the happiest and the best version of the mom and parent she wants to be. Remember that it’s what works for you and your family. It might seem weird or wrong to somebody else, but you have to remind yourself that it’s what works for you. 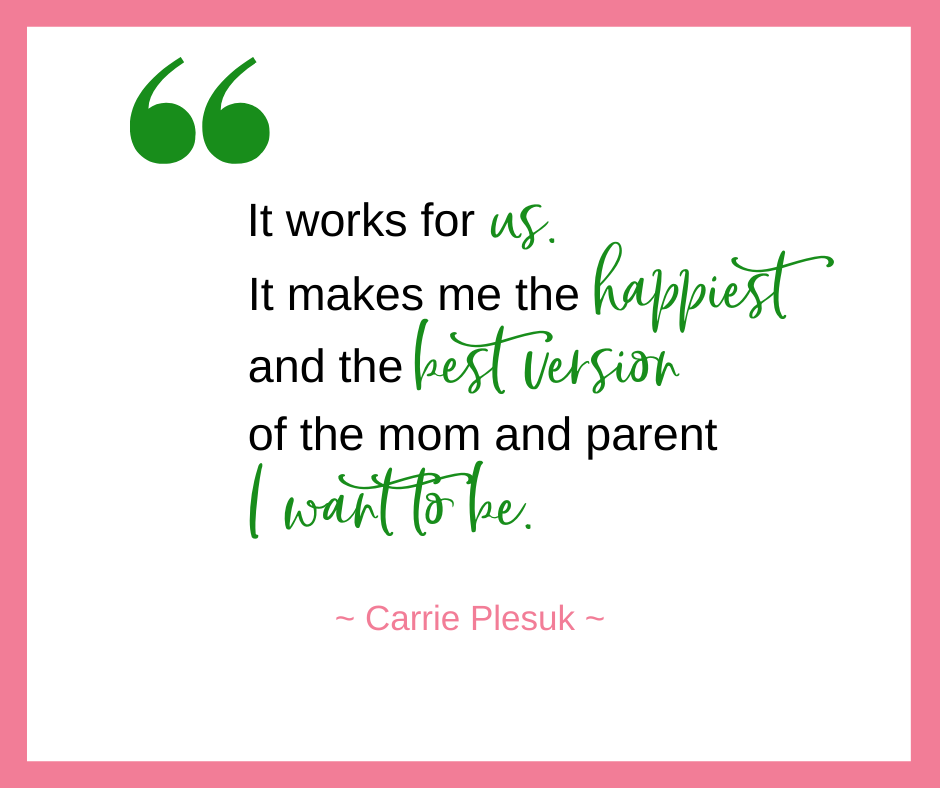 For Carrie, it’s been hindsight too. She can now confidently talk about and put it into words all the things she’s gone through, all of the thoughts that went through her head, and all the planning that went into it. Taking the time to talk about things has been helpful in creating cohesiveness in her thoughts.

A TRANSITION TO REENTER THE WORKFORCE

Carrie’s youngest child is currently in morning kindergarten. Over the last year, Carrie has had the most amazing opportunity with TimberNook to very gradually reenter the workforce. She says that she gets teased a little bit that she’s currently working one half day per month. However, it’s been great and she even gets to bring her kids with her! TimberNook is an outdoor program that was actually created by an occupational therapist. Carrie says that she couldn’t have dreamt up a better opportunity for her to get back into working. She is now doing an online training program as well as some in person training with the provider here in the city. This will lead to Carrie becoming an associate TimberNook provider.

When Carrie’s youngest is in grade one next year, and at school all day, she hopes to work a couple half days a week. She appreciates the flexibility of the position in terms of being able to make up her own schedule. Carrie’s hope and plan is to still be able to drop off her kids at school in the morning and then pick them up after school. This is a priority for her.

WORRYING LESS ABOUT WHAT OTHER PEOPLE THINK 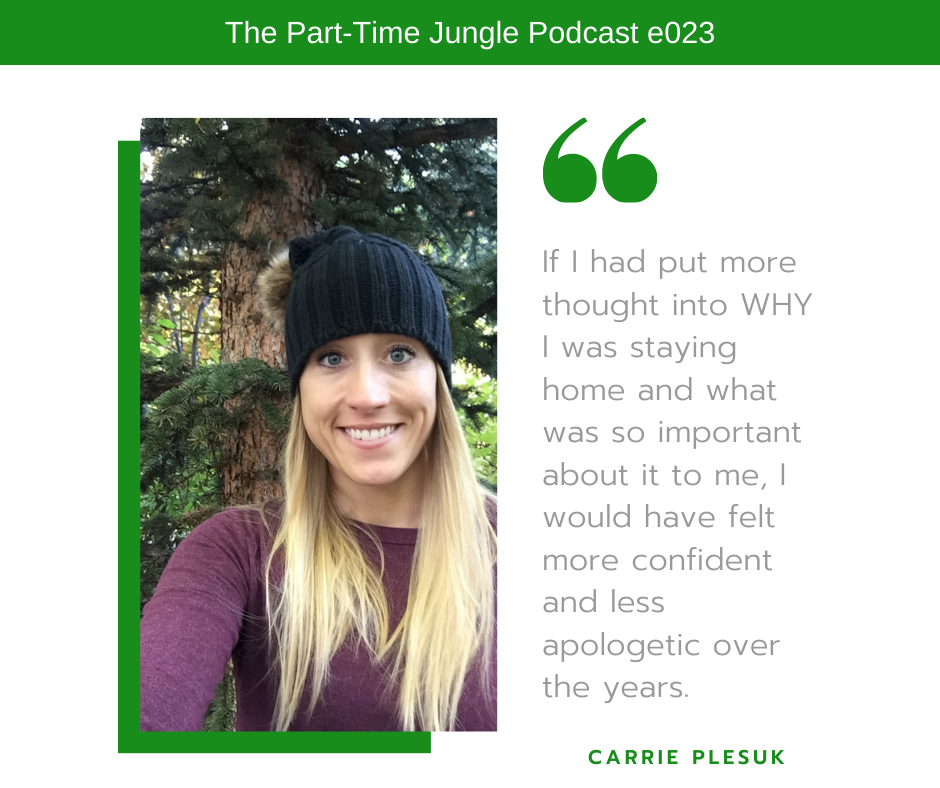 LEANING IN TO HER CHOICE

Carrie said that she felt like she was leaning out when the whole world was saying to lean in. Ultimately, though, she really leaned into staying home. Carrie fully embraced her choice. But… there was still that apologetic side for doing it and that self doubt in thinking that maybe it wasn’t the right thing. Carrie just needed to remember that it was the right thing for her and for her family.

Carrie encourages other moms to try to find and to make a little community. This might be an established village of family and friends. Connect with a group of moms or connect with friends who are not moms but who are people that you can lean on and have a bit of help from in your juggle. If you don’t want to do a baby groups, do something for you. For example, look for a workout group that you are interested in. It is so important to find someone who you can talk through things with.

Carrie has a monthly girl’s night with her friends that they call “Wine and Whine”. They don’t always drink wine and they don’t always whine, but that’s what they call it! It’s an opportunity to talk about everything and anything, whether it be motherhood, work, or anything else. It has really helped Carrie just to be able to talk through things. In general, Carrie says that getting together with friends and family and talking, has been like free therapy.

A resource that Carrie has found incredibly valuable in her motherhood journey is the magazine “Today’s Parent”. Key to Carrie’s juggle as a busy mom are her family, her friends, and some great parenting articles! 🙂

Thanks so much to Carrie for this fantastic conversation and thank YOU for tuning in!